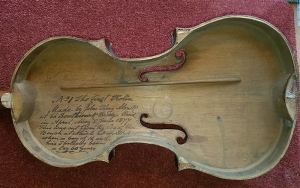 I was asked to repair this violin.  The neck was loose and the button was split along with needing a professional setup, Pro bridge, soundpost etc.  When I  removed the front I found this lovely inscription from the maker inside.

‘No 1 The first Violin made by John King Monk at 66 Southwark Bridge Road in April, May & June 1877. This was out from the leg of the Bench at which I worked when a boy of 16 and has it there been a leg 60 years’

John King Monk was born 22nd January 1846.  As mentioned above he didn’t start making until he was 31 on Southwark Bridge Road, London, later moving to the Merton area in Surrey, UK.  He sourced his wood from some unlikely places to modern makers, we go to specialist timber yards for tonewoods.  He would scavenge the cabinet makers of Shoreditch, London and buy slabs of Maple and Sycamore for the back, ribs, scroll and neck.  For the front, he needed to find the softwood Pine or Spruce.  He found out that an old factory was being demolished in 1886 at the foot of London Bridge and managed to acquire some lovely straight grained Pine beams that had been in situ since the factory had been built in the 1830’s.

10 years later he repaired a couple of cracks on this violin and again wrote a shorter message.

This violin is by no means perfect and a great representation of this makers work, it was his first so give him a break.  The corner blocks don’t fit the ribs properly.  The bass bar is a little short and too thick.  The scroll is roughly carved and he had filled a knot hole with a piece of dowel, but this violin represents the start of an illustrious career where he made in excess of 230 instruments.